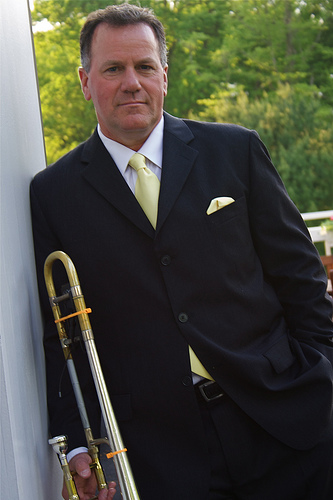 Ticket Cost is $15 in advance through the Music office of the High School and $20 at the door the night of the event.

George Murphy taught music in the Foxboro Schools for almost 3 decades, before his retirement in 2014. Formerly, he was the Music Coordinator of the Old Rochester Regional H.S./Junior H.S., and Director of Brass Studies in Revere.  As a duel major (performance and education) student at the University of Lowell, and Berklee College of music, he received his BA and BMED degrees, while performing with Herb Pomeroy’s Recording and Line Writing bands, and Phil Wilson’s Dues Band.

Mr. Murphy conducted the FHS Concert Band, Symphonic Winds, Marching Band, the Fifth and Eighth Grade Concert Band, the Foxboro Junior Jazz Band, and was actively involved in the FHS Jazz Ensembles.  His ensembles have won numerous awards while performing throughout the New England area, including Gold Medals at the SE District Jazz Festival in MA.  The Foxboro Junior Jazz Band has been featured, with Mr. Murphy as clinician, at the MENC Massachusetts State Convention, where they premiered an original composition by Tiger Okoshi.

In 2008, Mr. Murphy accompanied the Foxboro HS Jazz Ensemble to Washington DC for the President Obama Inauguration Celebration, where the students performed with the great Dave Brubeck.

A clinician, adjudicator, guest artist, and guest conductor at several festivals through out the Northeast, Mr. Murphy was a recipient of Downbeat Magazine’s Achievement Award for Jazz Education.  During his long career, he helped develop the Foxboro Summer Music programs and taught at the University of New Hampshire Summer Youth Music School (SYMS).  Today he is Co-Director, with Steve Massey, of the Foxboro Summer Improvisation Camp, and is active in the Boston music scene as a trombonist.

As a professional trombone player, Mr. Murphy studied with John Coffey, Phil Wilson, Hal Crook and Bill Watrous, amongst others.

In addition to leading his own band, “Horns in the House”, he has performed with some of the most outstanding musicians and bands in the area, including the Ken Hadley Big Band, the Duke Belair Orchestra of Providence, and recorded with Rebecca Parris and Amanda Carr.